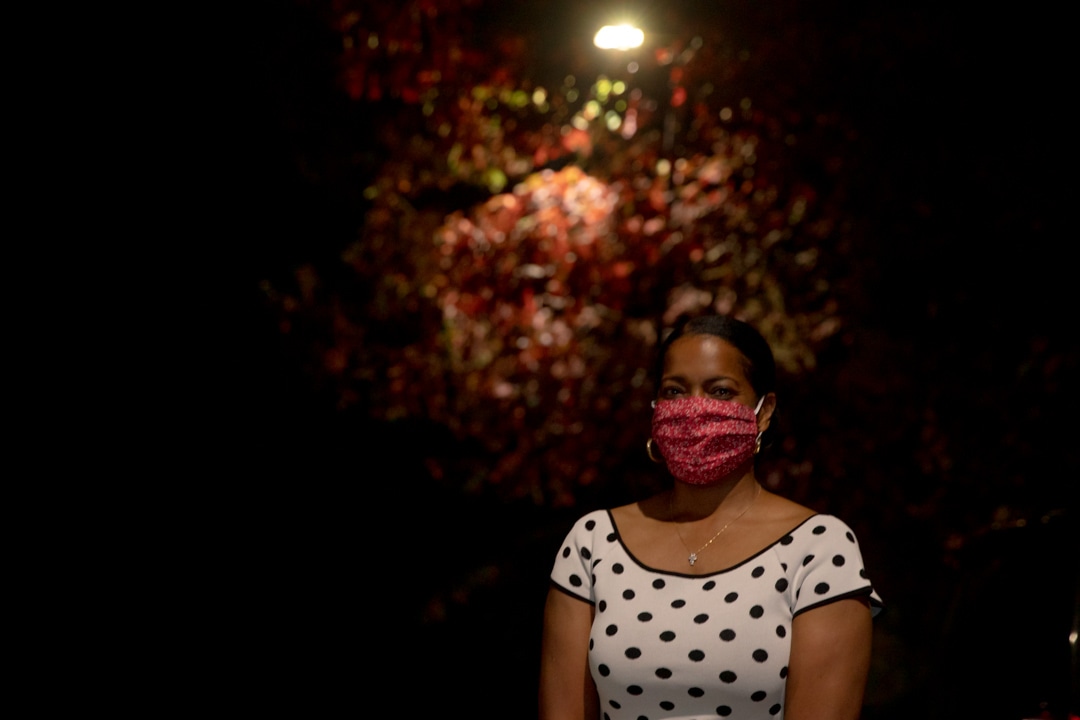 A political neophyte who bucked the Connecticut party establishment and was swept into office on a “blue” wave two years ago, U.S. Rep. Jahana Hayes is now facing another unusual election.

The former national teacher of the year does not face the types of challenges she had to overcome two years ago, when she started with no campaign money, had to juggle a high school teaching job with campaigning and fight Connecticut Democrats who rallied around rival Mary Glassman, a former town official, in a primary.

Hayes no longer has to scramble for campaign cash – she raised $1.8 million for re-election – and is fully supported by the state Democratic party– and the national Democratic Party — and is favored to win re-election. But this race is as unusual as her first bid for office, just in a different way.

Hayes, 47, is facing twin challenges: one from GOP rival David X. Sullivan, a well-spoken, politically savvy former assistant U.S. Attorney, and the other from the pandemic.

Hayes won the seat two years ago with the help of personal appeals that sparked grassroots enthusiasm for her candidacy. Now personal contact with those supporters is difficult, and she says the pandemic has also made it hard for the lawmaker to find time away from her congressional work to campaign.

Although members of Congress are spending a lot of time working remotely, Hayes said planning for campaign events – all of them virtual – is interrupted by tele-conferences with colleagues and other work.

“If there’s a caucus call or committee meeting, that takes priority,” she said. “I’m spending my days doing my office work and trying to campaign the best way I can and be safe.”

She also said “there’s no blueprint” for campaigning during the pandemic. Like many candidates, Hayes has resorted to virtual town halls, including one with Newtown residents that was hacked by individuals posting racist comments. Hayes is the first Black congresswoman from Connecticut.

The pandemic has also been personal for Hayes. The lawmaker fell ill with COVID-19 and was forced to quarantine during crucial weeks of the race in September. She was also quarantined earlier in the year at her home in Wolcott when her husband tested positive for the virus.

“There are days when I definitely feel the lingering effects,” Hayes said.

But, unlike Hayes, Sullivan has knocked on some doors and attended some public events, including a rally at the state Capitol this summer to protest a police reform bill.

For the Republican challenger, the pandemic’s largest impact was on campaign fundraising. Sullivan raised nearly $370,000 — more money than the other Republicans challenging a Connecticut member of Congress this year, with the exception of Margaret Streicker, a wealthy businesswoman who has loaned her campaign about $1.6 million in an effort to unseat Rep. Rosa DeLauro, D-3rd District.

“The economic recession caused by the response to the pandemic has impacted campaigns, just as it has impacted businesses of all kinds,” said Linkletter. “Reduced funding has increased the need to allocate all spending very, very, carefully to achieve the best possible return on investment.” 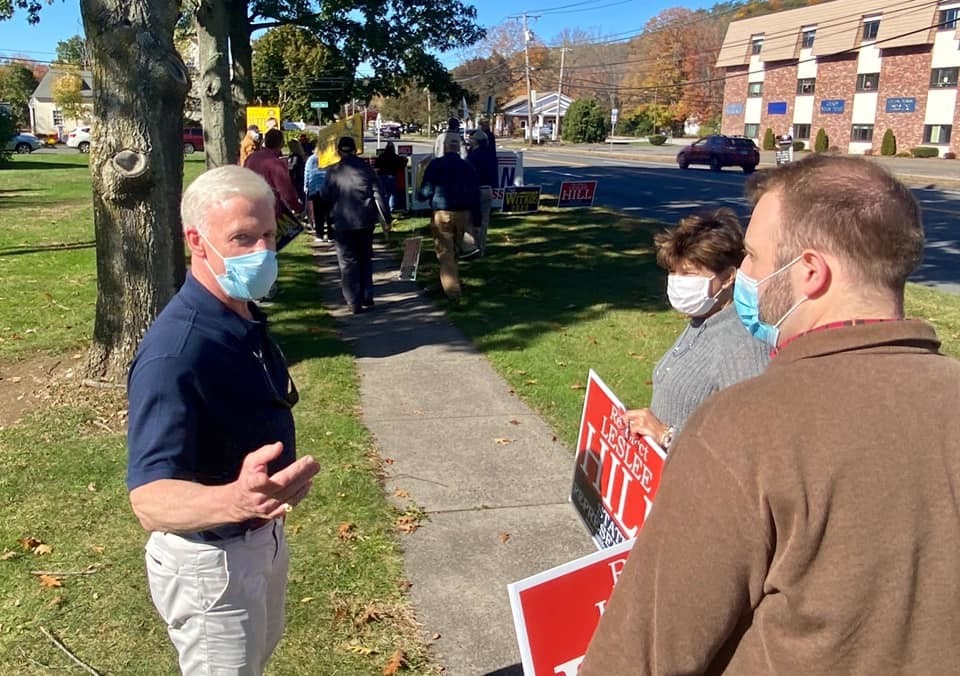 Sullivan at a sign-waving event in Canton.

A ‘fragile’ district for Dems

Despite the upheaval to politics caused by the pandemic, the Hayes-Sullivan race is a classic contest between an incumbent who is running on her record and a challenger who says that incumbent is out of the mainstream of her district’s political bent.

Hayes was sent to Congress two years ago because something unexpected happened: There was an open seat, a rarity in politics, created when three-term incumbent Elizabeth Esty decided not to seek another term following abuse allegations against her former chief-of-staff.

The boundaries of the sprawling 5th District in Northwestern Connecticut had been redrawn in 2002, when the state lost a congressional district because of slow population growth. The old Waterbury-based 5th District was merged with the New Britain-based 6th District, which had been represented by Republican Nancy Johnson.

“Hayes’s seat is the one incorporating most of the one GOP House seat we had in Connecticut,” said Kenneth Long, a professor of history and political science at the University of St. Joseph.

“Hers is the most fragile of the 5 Democratic seats, but it is not very fragile,” he said.

Still, that fragility prompted Esty to position herself as a moderate Democrat. Although Hayes was part of a huge class of Democratic freshmen that included a crop of  progressive activists, including Rep. Alexandria Ocasio-Cortez, D-N.Y., she has not embraced the extreme left of the party.

A recent mailer in support of Sullivan’s candidacy accuses Hayes of voting with the Squad. While Hayes shares a few of the Squad’s progressive ideas, her emphasis in Congress has been on education reforms, and she has shunned the spotlight and some of the more controversial issues promoted by the left wing of her party.

For instance, Hayes, whose husband is a Waterbury police officer, does not support “defunding the police,” a slogan that has been interpreted to mean everything from shutting down police precincts to shifting money from traditional law enforcement so that police departments can hire social workers and psychologists.

“Voting against the police is voting against my own self-interest,” Hayes said. “Anyone who looks at the votes I’ve taken will see that I’m not far left.”

And Hayes has rolled back a bit on the issue of “Medicare for All,” saying the time is not ripe for it and that it’s an aspirational goal. “I’ll work with anybody on a plan that gives people better access to health care,” she said.

But she said she is in line with the progressive wing of her party on other things, including food security issues and climate change.

“We could have done more” on those issues, she said. “There are a lot of issues where we could have been bolder.” 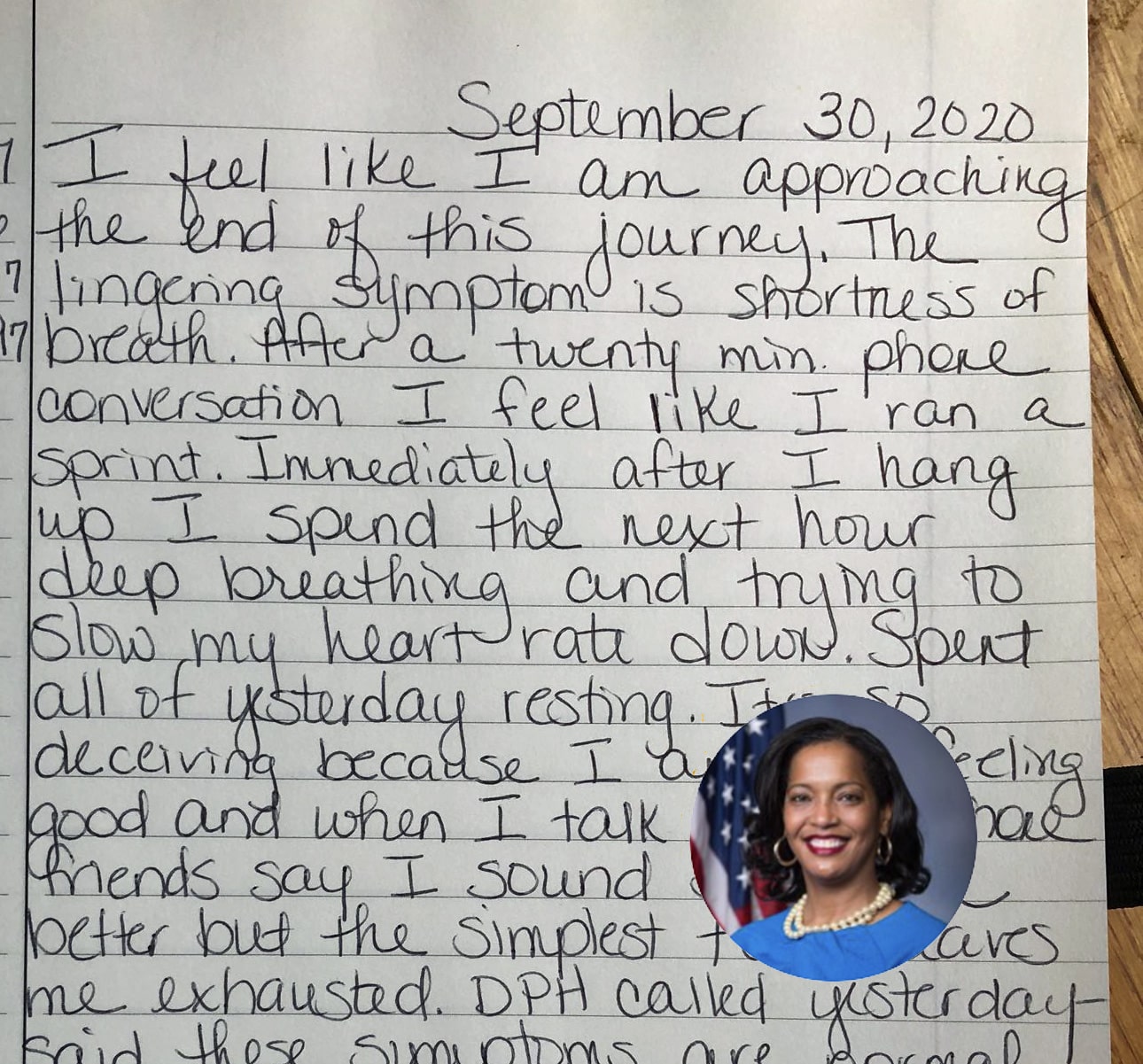 Jahana Hayes shared a diary on Twitter that chronicled her bout with COVID.

Meanwhile, Sullivan, who spent 30 years as a federal prosecutor and teaches criminal law at Western Connecticut State University, has fashioned himself as a “law and order” candidate who is proud of the many endorsements he’s received from 5th District police departments.

Sullivan also supports lower taxes for businesses and shares Trump’s goal of opening up the economy, saying Connecticut had lagged the nation in coming back from the 2008 recession before the coronavirus claimed its first U.S. victim.

In the last of five debates with Hayes, Sullivan called himself a “Reagan Republican.” But he also backs many Trump initiatives, including the construction of a border wall between the United States and Mexico and the suspension of a payroll tax the president has promoted but Democrats and many in his own party don’t like.

Sullivan has also created a little space between himself and Trump when it comes to the Affordable Care Act. The president insists on its repeal and recently tweeted that he hoped the Supreme Court, which will soon hear arguments on a challenge to the ACA, will invalidate the health care law.

Sullivan with a former student at a police rally in Watertown.

Sullivan says he thinks the high court will “remove clauses” deemed unconstitutional, leaving its most important mandates – including the requirement insurers cover people with pre-existing health conditions – intact. “The ACA needs to be fixed or replaced,” Sullivan said.

This is considered a Democratic year because of enthusiasm among Democratic voters who want to oust Trump. Long said Hayes should have no problem fending off Sullivan.

“Winning with 56 percent her first time in 2018, in a good turnout for Dems year, she should do at least that well (now that she’s) an incumbent. And probably a good bit better,” he said.

Meanwhile, Sullivan does not think having Trump at the top of the ticket will hurt him.

“Voters this year feel very strongly, both for and against Trump and Biden,” said campaign spokesman Linkletter.

He also said Trump won Litchfield County in 2016, and the president’s support appears very strong there again this year. “And Connecticut voters are also known to split the ticket and not vote along strict party lines,” Linkletter said.

He also cast doubt on polls that show Biden is favored nationally and in certain key swing states.

“Many voters don’t like to share their candidate preferences openly,” Linkletter said “So polls can be misleading.”

How essential is ‘Essential?’

In this unprecedented holiday season, we give thanks for all the dedicated, essential direct support, administrative, and health care professionals of Oak Hill, Gilead...
Read more
CT Mirror

When you put trust in teachers, we will not disappoint

It’s not hard to imagine how difficult this year has been for students -- experiencing unpredictable shifts to when and where they are in...
Read more
- Advertisment -