About 85% of candidates for the General Assembly used public funds to seek office in 2018, helping to make Connecticut’s Citizens Election Program a national model, according to a new analysis by Common Cause, a Washington-based clean elections group.

And while a loophole carved out through a 2010 U.S. Supreme Court ruling allowed private expenditures to nearly match the $12.8 million in public funds spent, that program’s growth still has encouraged lawmakers to tackle issues they otherwise would have avoided.

“Citizen-funded election programs step in to create space for policies that favor large swaths of everyday Americans,” wrote Beth Rotman, who leads Common Cause’s Money in Politics & Ethics Program and co-authored the report along with researcher Lisa Nightingale. “Particularly when combined with restrictions on lobbyist and government contractor contributions, these reforms represent the best way to prevent government capture by the wealthy.”

Connecticut grabbed national headlines in 2005 and 2006 when the legislature and then-Gov. M. Jodi Rell enacted a sweeping campaign finance reform package that not only established public funding for state races, but also:

The Citizens’ Election Fund receives most of its funding from the sale of abandoned property. Candidates qualify for public funds by first raising seed money in small increments, between $5 and $250, from individuals.

When 73% of state legislative candidates accepted public financing in Connecticut in 2008 — the first campaign under the new system — it topped first-year bests achieved in Arizona and Maine, the only two states with similar programs at the time.

Rotman, who was the founding director of Connecticut’s citizen election program — leading it from 2006 through 2011 — noted participation continued to grow despite a very painful U.S. Supreme Court decision.

In 2010, the nation’s high court ruled in Citizens United v. the Federal Election Commission that corporations unions, wealthy individuals and other interests could spend unlimited amounts of money to influence campaigns — provided they don’t coordinate such activities with the candidates.

A review by the Associated Press found $12.5 million in private funds was spent to influence state elections here in 2018, though the bulk of that was focused on the governor’s race.

Nonetheless, legislative candidates increasingly chose to utilize the Citizens’ Election Program, with participation rates averaging 76% in the first decade and reaching a new record peak in the last election.

Equally important, Rotman said, the availability of public resources led Connecticut legislators to tackle issues that had long been taboo, largely because of the influence of well-funded lobbyists and special interests.

For example, powerful lobbyists for years ensured that beer and soda distributors could keep the tens of millions in bottle deposits unclaimed by consumers. 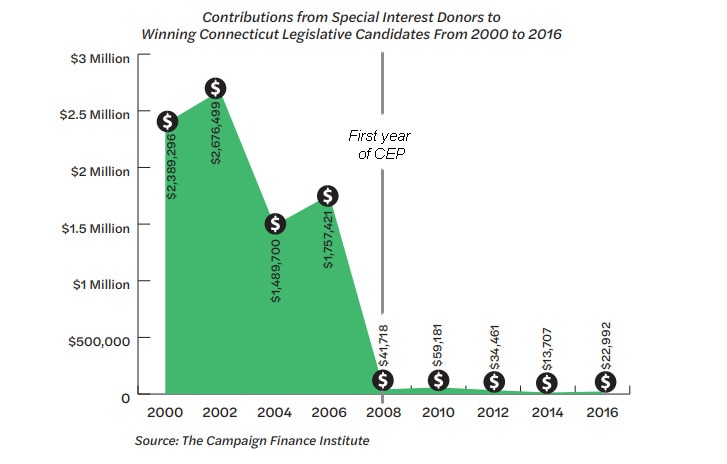 But in 2008, the first legislature elected largely on the strength of public funds voted to return the unclaimed deposits to the state’s General Fund.

Over the past decade this has meant a total of about $240 million has been available for public programs.

“This “bottle bill” vote struck many veteran lawmakers, reformers, activists, reporters and members of the public as remarkable,” the report states. “Many still cite this vote as the singularly most powerful evidence that public financing can lead to better governance.”

Rotman also cited 2019 measures establishing a paid family and medical leave program and extending sick leave to part-time workers as examples of legislation that had been proposed for many years and finally won passage in the era of public financing.

She also noted the program represents a tiny fraction of overall state spending — and arguably saves much more than it costs.

The $27 million in public funds spent on state elections in 2018 — $12.8 million on legislative races and $14.2 million on gubernatorial and other statewide contests — represents 1/7th of 1% of all General Fund spending that year.

More importantly, advocates of the system say, as lobbyists’ influence over campaigns has dropped, legislators and governors have been more willing to revisit corporate and other business tax breaks.

Connecticut has corporate tax credits and exemptions worth $556.2 million per year on the books in 2008 when public financing began. Adjusted for inflation that represents a present-day cost of $682.9 million. And many of those breaks, once established, had not been re-evaluated for years or decades.

But that pool of tax breaks has been tightened considerably since then, and currently is worth $312.6 million.

Besides reducing the clout of special interests, the Citizens’ Election Program has allowed more women and minorities to run for state office, creating a more diverse General Assembly, Rotman said.

Sen. Mae Flexer, D-Windham, who began her legislative career in the House, won her first election in 2008 — and every one since — using public financing.

Flexer, who co-chairs the legislature’s Government Administration and Elections Committee, said she wouldn’t have been able to run for office otherwise.

“I ran because there were not a lot of young women in the legislature,” she said. “I was not connected to wealthy people or lobbyists, so the Citizens’ Election Program made my run possible.”