Jeff Jacobs: We cannot forget the power of sports: ‘That’s my escape.’ 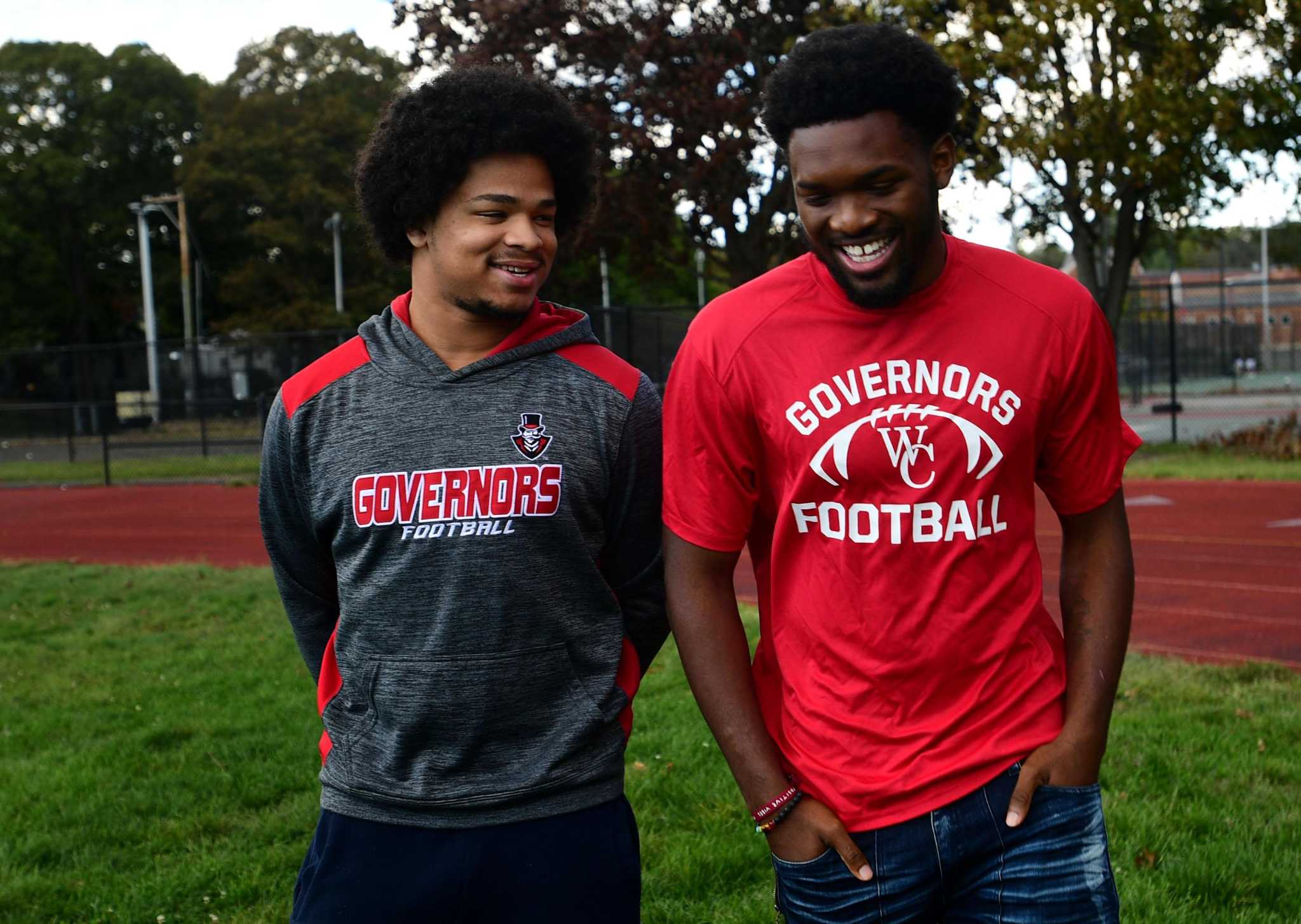 Jabez Cubiz had just finished his Arabic class on Friday morning when he picked up the phone. All classes at Wilbur Cross High are online right now, and we were chatting about how some teachers have technological savvy and some don’t.

Words to break the ice in a conversation. Words that inevitably lead to the question about how the saga of high school football dragging through the summer and its ultimate fall cancellation in Connecticut affected his life.

“It was painful,” Cubiz said. “Literally painful. You decide, yeah, I’m dedicating my soul fully to this. And then you’re told you guys can’t play, can’t practice. OK, shut everything down. And then it’s back to everyone can play. Now I’m confused.

“Then Cross and Hillhouse can’t play. Others can. Do I have the power to switch to somewhere? Thought about that because I’m a senior. And then they do shut the whole thing down. I’m 18. I want to get a job. ‘When are you available?’ That’s the main question. I don’t know when.”

An hour earlier, Armon Hyslop picked up the phone after finishing his online courses for the day. We chatted about practice protocol, distancing and how coach John Acquavita yells at them if they don’t wear their masks. Words that lead to the inevitable question about no autumn football.

“My senior year, working out, going hard and we get hit at the last minute,” Hyslop said. “It’s heartbreaking.”

He goes silent for a full five seconds.

Acquavita, a coach dedicated to winning football games, a man dedicated to helping New Haven’s young people, holds workouts on Monday and Thursday. Bad weather changes the schedule. As of Friday, it still hadn’t been determined whether Wilbur Cross would be able to play 7-on-7 this fall. And because of COVID-19, the entire state awaits the possibility of spring football.

Cubiz, a running back-linebacker, and Hyslop, a wide receiver-cornerback, were the two Wilbur Cross players selected to the 2019 Levi Jackson All-Area team by the New Haven Gridiron Club. They became close friends after meeting in the seventh grade.

“Jabez is always smiling, except when he’s on the football field and then he’s one serious dude,” Hyslop said. “He loves the game so much.”

“Armon is the only kid I know who loves football as much as I do,” Cubiz said.

Both badly want to play in college. If only it were that easy. And these are Acquavita’s two best players.

There are city players throughout New Haven, city players throughout the state who depend on football for structure that helps them in the classroom, for goal attainment, for a college education, to keep them safe and busy. When there is no football, matters can go sideways. Lives can change in a flash. That’s not hyperbole or dramatic stereotype.

“And it is the story where I wish more people knew about the effects,” Acquavita said. “I’m all about the safety with COVID. I’m right with you. I don’t want to get it and be sick, get my parents sick or whoever. I’m on the field with a cloth mask for two hours. It’s was like 1,000 degrees in the summer. I was about to pass out, but I’d do it for longer to get football off the ground.

“The sad part, what gets lost in the political piece, is between us, Amistad and Hillhouse, you probably have 150-200 football players. Out of that 200, there’s definitely 50 that are going to go to the dark side with nothing to do. Why would I go virtual learn when I can wake up at noon and just chill with my buddies? And then you’re on the street. We’re not making that stuff up. That’s facts. That’s the stuff that happens around here. Even good kids will go to the dark side. I don’t think people really thought about that and talk about it as much as they should.”

Acquavita said when Hyslop, 5-11 1/2, 190 pounds, is on his A game he’s a Division II-type player. He’s very fast. He’s a leader. In the summer, his coach said, he was working out every day like a champ. And then the hammer fell from the New Haven Health Department that no matter what happens, there’ll be no 11 vs. 11.

“Armon kind of went dark for a while,” Acquavita said. “I didn’t have contact with him for a good 10-12 days. He said he was just so frustrated and he was getting a job at Stop & Shop. I didn’t see anything getting done in class. I’m like did he just bag everything?

“Now we’ve reeled him back in. Here’s a kid, close to a 3.0 GPA, he could get New Haven Promise full tuition at a state school. He can play at Southern or Western, maybe be a walk-on at Central.”

Hyslop applied for the job at Stop & Shop. He got it. Ultimately, he decided not to go.

“My mom talked to me about focusing on football, working out, keeping hope,” Hyslop said. “I decided to do what she said.”

Cubiz comes from a difficult situation. His dad is not in the picture. His mom works hard to provide for Jabez and three younger siblings.

“In a household without a father, it feels for some people like a burden,” Cubiz said. “I see it as an opportunity to give back to my mom what she gave me. You can never fully repay someone who gave you your life. But I’ll do as much as I can do. Babysit the kids, take the kids to school if she’s working overtime to pay a bill.

“It’s not her fault my dad did what he did. Who am I to get mad at her for his problems and what he did to us? We’re in a certain predicament because of him. It’s another reason I’m trying my best right now in schools and sports. So she has something to look back on. I want her to have that proud feeling as a parent.”

Despite his size, which could limit DII possibilities, Cubiz is Cross’ best player pound-for-pound, and Acquavita said he could make an immediate impact at DIII. He also did not have a good academic start in high school and has rededicated himself to a solid finish. Without football and without a full senior season as Cross’ star running back, Acquavita needs to work to find a place for him.

“He’s nervous about it,” Acquavita said.

He’s also hanging in there.

“I’ve been in love with football my whole life since the first game I saw on TV — the Giants winning the Super Bowl against the unbeaten Patriots the 2007-08 season,” Cubiz said. “If I can’t play it, I’m watching it. If I can’t watch it, I’m studying it. If can’t do that, I’m thinking about it, playing Madden. Football is always on my mind.”

Hyslop talks about majoring in health and wellness, about becoming a personal trainer or travel nurse.

Cubiz talking about coaching and becoming a personal trainer. He also talks about his dream, against considerable odds, of playing in the NFL.

“Every great person, whether it’s sports, music, anything, has a great story,” he said. “I can feel it building. This 5-8 kid out of Connecticut, imagine hearing that? It doesn’t sound typical. That’s why I like it.”

None of it comes without college. As one of the fastest football players in the state, Hyslop promises to bring toughness along with his speed.

“Coach thinks I should play corner in college,” Hyslop said. “I want to play wide receiver.”

Cubiz said he has gotten some college letters, but no offers.

“I’m 5-8, 200, I’m not playing defense in college, I know that,” he said. “I’m perfect for running back. I also didn’t play a big role in our offense until the end last year. That’s why I’m praying for a senior year. Even if I had gotten the ball a lot as a junior, that film would be two years old. If I was a college coach, I don’t want to look at film from two years ago either.”

So Hyslop and Cubiz stick with their online classes, hope for colleges to call and pray for football to be played in the spring. This is the story of two friends who love football, but it is the story of hundreds of city kids in our state, too.

“People at Cross, in New Haven, we need sports,” Cubiz said. “I know I need football to have a better chance with college. As far as the other aspect, New Haven is obviously a dangerous place for kids, for anybody. The main thing people here know is drugs on the street. The good side is they know sports. That’s my escape.

“Everyone has their own individual problems and their own place to run to. Football is mine. You take that away from them and the only place they have to go is to the bad stuff. What do you expect out of them? No, football isn’t for everybody. Sports isn’t for everybody, just as school is not for everybody. Not everyone is going to be great academically. Or they feel school isn’t going to take them anywhere money-wise, so they turn to the streets.”

Cubiz stops and said resolutely, “Not me.” Not turning to the streets.

“But I’m saying take sports away from kids in New Haven compared to different parts of Connecticut where they have other stuff they can run to. Kids here don’t. We’re put in the situation where if you take sports away, there’s nothing for a lot of kids here.”

That’s an 18-year-old young man talking. There is a mature truth in his words. We cannot forget the power of sports.

GREENWICH — Seizing the momentum and keeping it is being turned into an art form by the Greenwich High School girls volleyball team.Six matches...
Read more
High School Sports